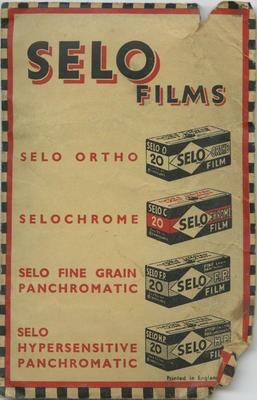 About this object
Photo wallet envelope advertising Selo film, containing 20 photographs relating to Napier man, RNZAF Sergeant Percy Hamlin who was killed while on active service in World War Two. Several of the images depict what is probably a line crossing initiation ceremony on board ship. Some images have information on the back of them; one reads: These are airgunners who arrived 10 days before us. Four of them went Egypt. Two have done their job. Another appeared in the newspaper yesterday.
On the back of one photograph are three signatures: H Toner RNVR; Freddie Hudson RNVR; B C Lennigan (?) RNVR
Two portraits are possibly Percy's parents Euphemia and Cecil Hamlin.