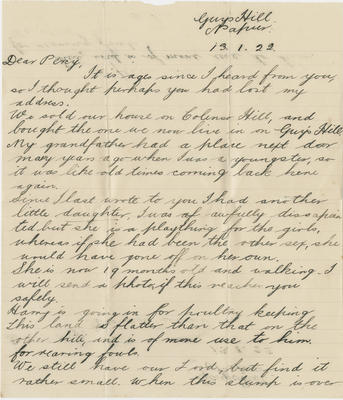 Brief Description
a) Letter written by Freda Satchell in Napier to her cousin Percy Hamshar in England, dated 13th January 1922. Freda tells Percy that the family has moved house and are now living on Guy's Hill. "My grandfather had a place next door many years ago when I was a youngster, so it was like old times coming back here again." They have another daughter, now aged 19 months. "I was awfully disappointed but she is a plaything for the girls." Amy and Evelyn are both at school now. The family goes swimming often, which Freda prefers to tennis for exercise. For 30 years Guy's Hill had just four houses, but since they have purchased there another four houses have been built and others are planned. "The Napier fire engine had never been up here and it gave the old residents a start when it landed up here in the middle of the night to suppress an outbreak in a washhouse not far from us." Napier Main School has been built opposite their former home. Their present house is the seventh they have lived in since she and Harry were married, "there fore ought to be lucky."