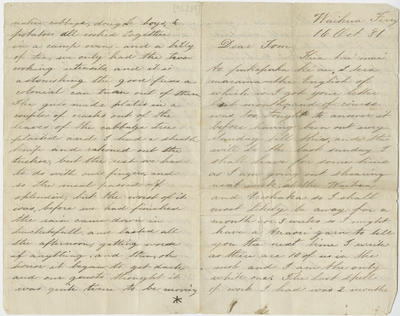 Brief Description
Letter written by Fred Hamshar in Hawke's Bay to his brother Tom in England, dated 18th October 1881. Begins with a sentence in Māori which Fred translates as "I got your letter last month." He tells Tom that he will be away shearing for a month, the only white man in a gang of 10. His last job was two months ago, repairing the road near Mohaka. Every night they would visit the nearby Māori pa. The first night there, Fred was handed a concertina, "and in less than a minute the young people come dropping in from all sides till there were about 50 and the whare was full. So all the hands turned out in the moonlight and such a lark as there was that night I shall never forget. The next day we were rewarded by their charming young dusky damsels coming out to the bush where we were at work to get 'puha' (a kind of native cabbage) at least they said that is what they came after, and invited themselves to dinner in the bargain. Of course our repast would not bear comparison with some of your English touches considering we have no knives, forks or plates, & only 2 pannikins between 5 of us. The dinner composed of a junk of beef from Mohaka, native cabbage, dough boys, & potatoes all cooked together in a camp oven and a billy of tea...it is astonishing the good feeds a colonial can turn out of them." Unfortunately it started to rain heavily, and as it was getting dark, Fred accompanied the girls home. They found the creek in flood; luckily the bridge had good hand rails and they all got safely through the icy cold water and back to the pa where Fred warmed up by the fire on the floor in the middle of the whare. The rain continued for days, and to make things worse Fred has had terrible toothache.