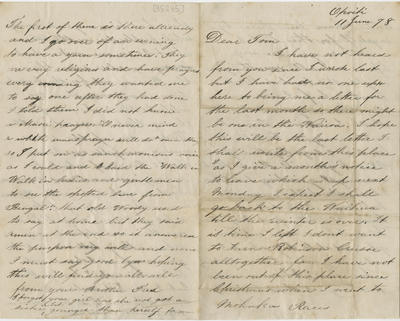 Brief Description
Letter written by Fred Hamshar in Hawke's Bay to his brother Tom in England, dated 11th June 1878. Fred hopes this will be the last he writes from Opoiti [Opouiti] as he has given notice to leave, having been alone for the last three months without anyone to talk to for days at a time. He hopes the moss specimen he is sending will keep whole until Tom receives it. A large number of white people have died in Wairoa recently, including a fellow Hudson immigrant who fell overboard and drowned in the Wairoa River while working as an engineer on the SS Result. The population of Wairoa is only about 300, however "there is going to be a lot of Maoris coming over the river to live opposite my whare...The first of them is there already and I go over of an evening to have a yarn sometimes. They are very religious." Fred finishes by asking if Tom's girl has a younger sister.