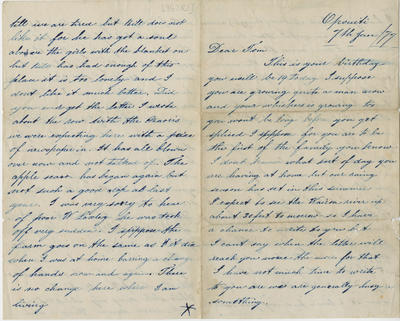 Brief Description
Letter written by Fred Hamshar in Opouiti, Hawke's Bay, to his brother Tom in England, dated 7th January, 1877. Fred acknowledges the date being Tom's 19th birthday. He says that the rainy season has set in and the Wairoa River is in flood. He spent Christmas at his uncle's place, and went to the Mohaka races on Boxing Day. "It is 34 miles to Mohaka from here but we think no more of riding that than you would of walking 3 at home." He tells Tom that "the row with the Maoris we were expecting" has "blown over now and not talked of." He describes the local bush vegetation including edible plants: "the best is the Kikea [kiekie] very much like a fine apple and very sweet...then there is the Nikau palm and tree fern momaki and berries of all sorts." He also describes native birds - grey parrots, parakeets and a "black talking bird called the tui", and lizards - "the Mokopirirakau, the Mokopari, Mokokakariki and Tuatara." None are poisonous "but people has been known to die from the bite of a Katipo [spider]."