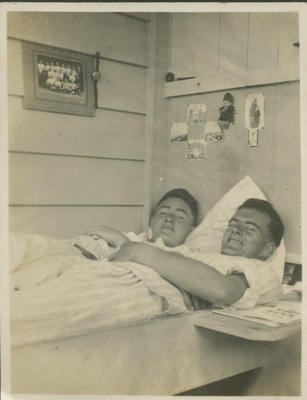 About this object
The photograph shows Gordon Brebner and a young man, possibly his brother, lying on a built-in bed in a wooden cabin or hut. On the wall in the top left of the image hangs a watch and a photograph of a football team, and on the right a small doll hangs among pictures pinned to the wall. A pipe sits on the ledge above the bed.

The image is displayed in an album that belonged to Nora Brebner née Nicol.

Media/Materials description
Black and white photograph glued to a page in an album.