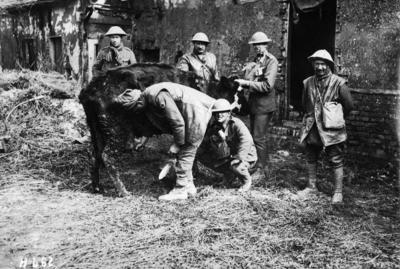 About this object
New Zealand soldiers seize the opportunity to obtain fresh milk from a cow abandoned by its owners in a village on the Somme. Shows a soldier milking a cow as two other soldiers steady the beast. Photograph taken Courcelles, France 1 April 1918 by Henry Armytage Sanders. H462 is written on the image.

The photograph is glued to a page in Leo Bestall's diary and album. Leo Bestall has written underneath the postcard, 1/4/18. Our squad outside our barn at Courcelles. The milk is faked - she had none.
Jim Hickey is at the back on the far left, Leo Bestall has a pipe and is holding the cow's head. The two men kneeling by the cow are identified as Hughie? and Lenny Jackson. The man on the far right is unidentified. 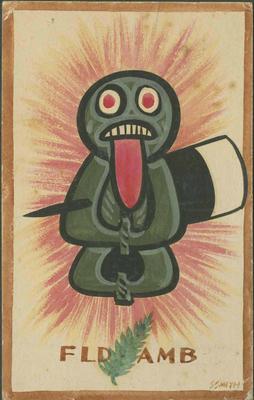