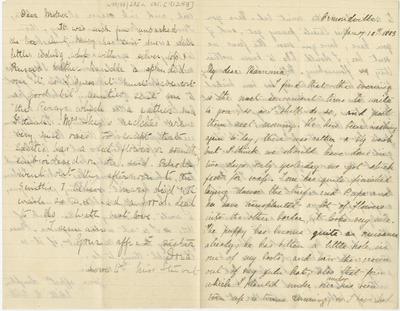 Letter, to Patty Webb from Dora and Edith Webb

Brief Description
There are two letters written on the same paper. The first letter is written to: My dear Mamma from her affectionate daughter Edith C Webb.

Edith discusses the big wash they had done the day before, that Tom has finished laying down the turf and he and Papa (Anthony Spur Webb) have transplanted flowers into another border, the puppy has bitten a hole in one of Edith's boots and torn the crown out of her Zulu hat. She asks her mother if she has been in Miss Stuart's fernery and if so has she seen the ferns they sent her. The boys have finished the cord they were making down by the fowl pen. The box has arrived from Aunt Mary and there is something for everyone except George. Dora has received a lovely riding whip with a silver head, Mary has got a tennis racket, and she had got an ink pot of Russian leather and a box with three penholders with a holder with an India rubber at one end and an ink eraser at the other. There is also a little knitting basket and a necktie and card from Mrs Skey and a card from the Misses Shiptons. Edith lets her mother Patty know that there is a little teapot for her from Aunt Mary. The children were so excited with the presents that they could not go to sleep. Baby received a Highland doll that she insists everyone has to kiss. Edith finishes the letter informing her mother that Dora wants to write something on the back and to give her love to Miss Stuart if it is appropriate.

Dora begins her letter with dear Mother and tells her how much fun it was unpacking the box. Aunt Mary had sent her a little riding whip with a silver top and Russian leather handle. The Aunties sent her a book and Mrs Skey a necktie. Rhonda went out in the afternoon to the Smiths and that they have a lot of washing to finish.

Credit line
from the estate of Miss Elizabeth Webb

Letter, to Patty Webb from Dora and Edith Webb