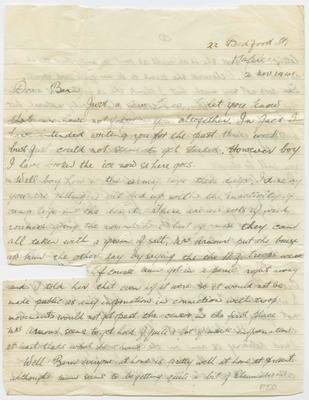 Brief Description
Letter from Ray Madden of Napier to Bernard Madden on active service in Egypt and dated 2 November 1941.

Ray talks about not forgetting about Bernard, rumours circulating in Napier about New Zealand troops, Louisa Madden worrying about himself and Pat, updates him on the health of Ray's father, his new job as a driver for Thomson Brothers and how bakers in the area have amalgamated. Ray also asks after Bill and mentions the goings on of Bob Bonisch, Oscar Brock, Jim O'Rourke, Nick O'Rourke and Jack Parsons. Also mentions individuals published in casualty lists, the New Zealand Cup for 1941 and how the children in the family are growing up.

Letter has been censored on first page.