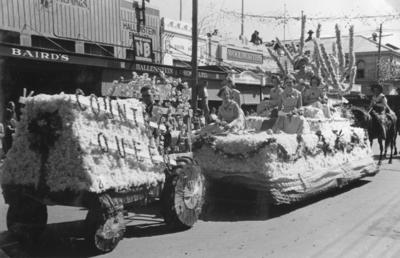 About this object
A photograph of the Country Queen float that formed part of a procession to Windsor Park held in Hastings on 8 November 1952 as part of the Hastings and District War Memorial Appeal, Queen Carnival Campaign. The float is decorated with wool and spring flowers. The Country Queen, Mrs Gladys Elizabeth Jane Hudson (née Lyons), is seated at the back of the float. Two flower girls, Sally Stead and Juliet Barker, are seated at her feet. Her three Maids of Honour, Misses Marian Stead, Kathleen Beamish, and Josephine Glazebrook, are seated at the front of the float.

The photograph has been taken on Heretaunga Street West. The Ruahine Building (built 1937) can be seen on the left. Among the businesses that are visible along the street are Baird's Drapery, Hallenstein Brothers Limited, Foster Brooks (bookseller, stationer), Woolworths, Land and Heighway Limited, and the Pacific Hotel.