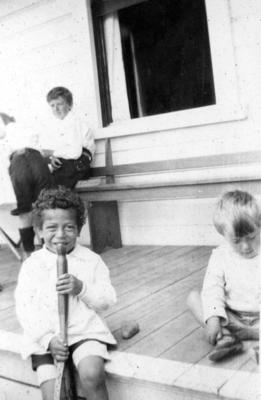 About this object
A photograph of a small group of boys playing on the verandah of St Hilda's Children's Home, Otane, taken between 1919 and 1920. The boy in the background facing the camera is identified as Noel. Tare sits in the foreground on the edge of the verandah holding a tennis racket to his mouth. At the right edge of the photograph Jack is visible looking down at a toy.