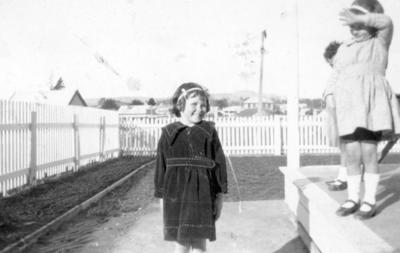 About this object
A photograph of a girl identified as Milly taken at St Hilda's Children's Home, Otane, between 1919 and 1920. Milly is standing in a yard in front of a white picket fence that surrounded the villa used as the children's home. She wears a dark dress with a collar and belt. She has a pale headband in her short dark hair. A girl in a light coloured dress shielding her eyes from the sun is standing on the verandah at the right of the image. She is identified as Ena.