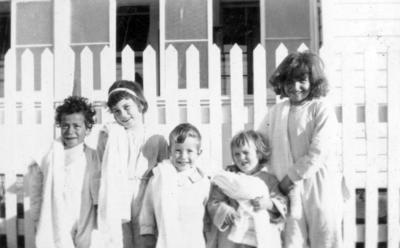 About this object
A photograph of a group of children dressed for baths with towels over their shoulders taken at St Hilda's Children's Home, Otane, between 1919 and 1920. The children are identified from left to right as: Tare, Ena, Jack, Gerta and Pearl. They are standing in front of the white picket fence that surrounded the villa used as the children's home. The partially enclosed verandah of the villa is visible in the background of the image.