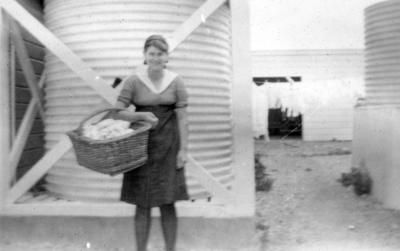 About this object
A photograph of a young woman identified as Dot taken at St Hilda's Children's Home, Otane, between 1919 and 1920. Dot is holding a washing basket. She stands in front of what appears to be corrugated iron water tanks. Washing on a line is visible in the distance between the two tanks.