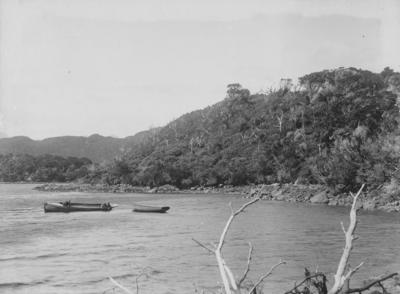 About this object
A photograph likely to have been taken in Facile Harbour, by Russell Duncan who travelled to Dusky Sound in 1905 and 1910.

The photograph is mounted in an album containing images of New Zealand scenery. A note on the album page reads: Wreckers over the remains of old Endeavour. The ship Endeavour was abandoned here in October 1795.

Media/Materials description
Black and white photograph glued in an album.