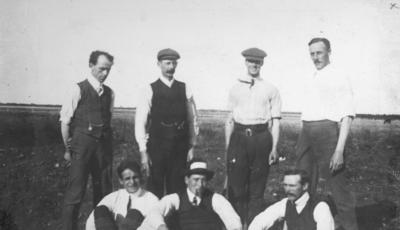 About this object
A photograph of a group of men who contributed to early flight experimentation in Hawke's Bay.

The photograph was likely taken in Riverbend Road, Napier, where Bertram Ogilvie and others were constructing and trialling aeronautical techniques from 1907 to 1911.

The men are identified from left to right, the back row : Mr Lawrence, R Goodger, J Munro, and Captain Hawkins. The front row: Mr Loren, Mr Ogilvie and Mr Smith.