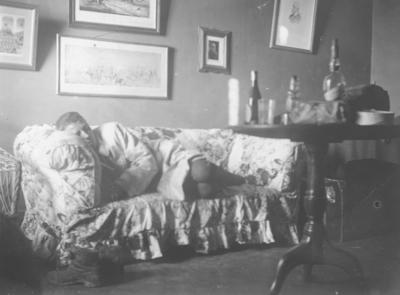 About this object
An interior photograph of Bertram Ogilvie asleep on a couch. The photograph is titled : the morning after.

There appear to several bottles of alcohol on the table in the right foreground of the image. This was possibly the aftermath of a successful flight attempt or triumph of Ogilvie and his team. Bertram Ogilvie and others were constructing and trialling aeronautical techniques in Napier from 1907 to 1911.

Photographer, unknown.
This photograph was taken some time during these trials between 1907 and 1911.