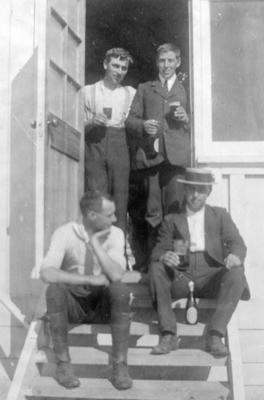 About this object
A photograph of Bertram Ogilvie and three friends or co-workers seated on a door step and in a doorway drinking.

The photograph was possibly taken at the property in Riverbend Road, Napier, where Bertram Ogilvie and others were constructing and trialling aeronautical techniques from 1907 to 1911.

Bertram Ogilvie is identified as the man in the back row on the right. The two men in the doorway are standing holding drinks in glasses and the man identified as Ogilvie is also holding a bottle in his right hand. The two men in the front are seated on the step. The man on the left of the image has his head resting on his hand with his head turned to the left. The other man holds a glass and has a bottle resting on the step between his legs. He wears a boater hat.

Bertram Ogilvie thought to have been the first man to pilot a powered aeroplane in New Zealand. He was the inventor of the principle of ailerons. While an employee of the firm of Hawkins and Rome, engineers in Hastings, he pioneered the construction of an aeroplane which incorporated the principle of ailerons. Attempts to launch the machine into the air on the beach near Napier did not meet with success, but after further trials the machine was got into the air and the aileron principle proved a great success.

This photograph was taken some time during these trials between 1907 and 1911.