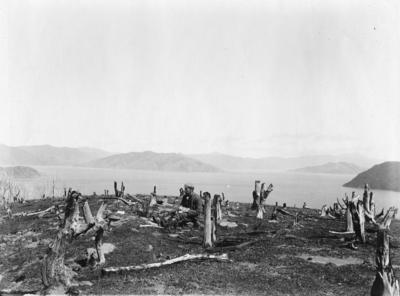 About this object
View of Queen Charlotte Sound otherwise known as Totaranui taken from the highest point on Motuara Island on 30 March 1902. The island is covered with tree stumps. At the centre of the photograph a man is seated on the ground holding a cat.

To his left a handkerchief has been placed on the ground. The significance of the handkerchief is outlined by a note on the album page that reads: Highest spot Motuara Island - where the handkerchief sits is where Captain Cook erected a post - On 31 January 1770 the post was set up and New Zealand taken possession of for the use of His Majesty George III and the Sound dignified with the name of Queen Charlotte - a bottle of wine was drunk and the empty bottle given to a Native Chief who was pleased with his present.