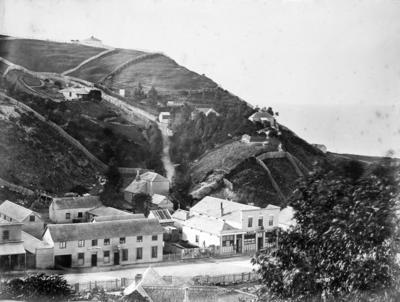 About this object
A photograph of Shakespeare Road, Napier, circa 1870.

The photograph is taken from an elevation looking down on the lower part of Shakespeare Road.

Visible at the left hand side of the image is the Settlers' Hotel.

Adjacent to Settler's Hotel is Mac's Hotel whose proprietor was George Henry Swan at the time this photograph was taken. It is noted that the building with skylights in the roof in the backyard at the left of Mac's hotel is a photographic studio. The writing on the window of the building attached to Mac's Hotel appears to read: Swan & Wrigglesworth Photographic Studio.