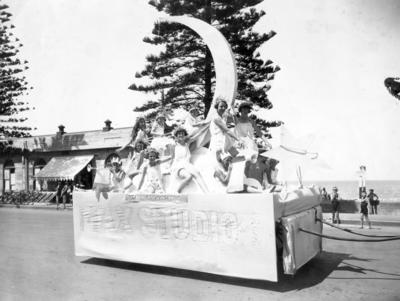 About this object
A photograph of the Max Studio of Dancing float for the New Napier Carnival Parade, January 1933. The dance studio of Constance Macdonald, Max Studio, is represented with young dancers positioned on the float under a crescent moon. A group of girls are dressed in white costumes and star crown headdresses. Two girls at the front and back of the float are holding heraldic trumpets. The float is on Marine Parade passing the Municipal Baths which are visible at the background left of the image. Several young swimmers in bathing costumes can be seen along the footpath in front of the sea wall. The New Napier Carnival, held from 21 to 28 January 1933, celebrated the opening of Napier after the 1931 Hawke’s Bay earthquake.