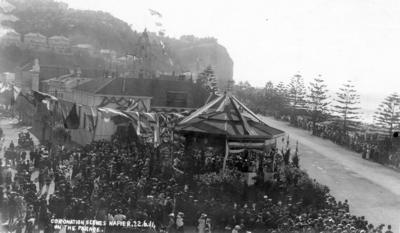 About this object
A postcard photograph of the Coronation Day Celebrations for George V on Marine Parade, 22 June 1911.

The image is taken from above looking down at the large crowd gathered around the band rotunda and along Marine Parade toward Bluff Hill. The band rotunda is decorated with ribbons and flags. The striped flag visible at the front of the rotunda is embroidered with a crown and the initials G R, meaning George Rex, King George V. There are also flags used as bunting on a cord hung between the rotunda and the Masonic Hotel, out of view at the left.

The Council Chambers and some of the buildings on the sea side of Herschell Street are visible at the rear left of the band rotunda. Some houses on the city side of Bluff Hill can be seen in this image. The crowd line the way down Marine Parade under the shelter of the Norfolk Pines. The structure of the Municipal Baths is discernible behind the pines in the distance, to the right of the band rotunda.