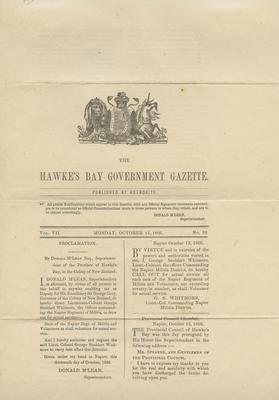 The contents include the following:

13 October 1866: the Provincial Council of Hawke's Bay conveys to Lieutenant Colonel Whitmore and the Officers and men under his command its deep sense and appreciation of the great and valuable service rendered to the Province by the gallantry and bravery displayed by the Colonial Forces in the engagements with the enemy (Pai Mārire) which took place at Omarunui and Petane on the 12th.

Napier 13 October 1866: Lieutenant Colonel Whitmore records the success of the engagement at Omarunui Pā by the Colonial Forces. He offers his thanks to Officers for their zealous conduct and support, and the Māori contingent.