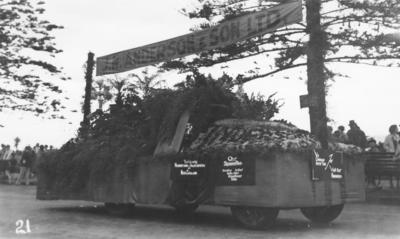 About this object
A photograph of the J N Anderson and Son float in the New Napier Carnival Parade, January 1933.

The New Napier Carnival, held from 21 to 28 January 1933, celebrated the opening of Napier after the 1931 Hawke's Bay earthquake. The nursery’s float is covered with plants and foliage planted into soil on top of the float. The sides of the car are covered in fabric. A sign strung between two plant covered poles on either end of the float reads: J N Anderson & Son Ltd.

Smaller signs at the side of the float read: The Leading Nursery Men and Palm Growers in New Zealand; Our Specialities - Gardens, Seedlings, Native Palms, Chrysanthemums, Dahlias. The sign at the front of the float reads: We cordially invite you to visit our nurseries. The float is travelling south along Napier's Marine Parade. Onlookers and Norfolk Pines are visible in the background along the Parade.

Signature/Inscription
This photograph must be acknowledged to the Hawke’s Bay Art Gallery and Museum (Inc.), Napier. Reference number, Stamp, Stamped