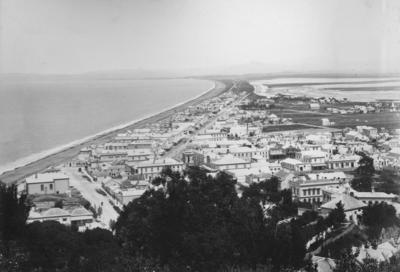 About this object
Left side of a two part panorama of Napier. This photograph was taken from Napier Hill looking towards Awatoto, maybe in the late 1870s or early 1880s. The Athenaeum (built 1865, with extensions added in 1873 and 1878) stands on the corner of Browning Street and Herschell Street. At the end of Herschell Street are the Borough Council Chambers (built 1874) and the Fire Engine Station. The Bank of New Zealand and the Post Office stand at the intersection of Browning Street and Hastings Street. Among the other streets that are visible are Tennyson Street, Emerson Street and Dickens Street.

The Tutaekuri River can be seen on the right side of the image. Cape Kidnappers is visible in the distance.