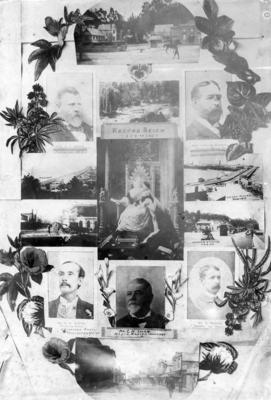 About this object
A photograph of a collage created to commemorate Queen Victoria's Diamond Jubilee in 1897.

The jubilee was a festival throughout of the British Empire. The image records events in Hawke's Bay during her reign from 1837 to 1897. At the centre of the image is an enthroned Queen Victoria.

Photographs of Hawke's Bay development also skirt the central photograph of Queen Victoria. These include photographs of Napier streetscapes, the Napier Botanic Gardens, the Port of Napier Breakwater, and general views of both Napier and Hastings.