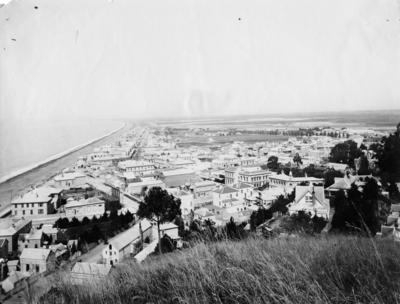 About this object
View of Napier looking south from Bluff Hill towards Awatoto thought to have been taken in 1878. Byron Street is visible at the base of Bluff Hill. Among the buildings that are visible along Byron Street are the premises of Large and Townley. The Napier Courthouse (completed 1875) is visible at the intersection of Browning Street and Marine Parade. The Athenaeum (built 1865, with extensions added in 1873 and 1878) stands on the corner of Browning Street and Herschell Street. The 1878 extension, known as the Conversation Room, is in the process of being constructed. Behind the museum, the Borough Council Chambers (built 1874) and the Fire Engine Station are located on Herschell Street. Among the other buildings that are visible along Browning Street are W Cato’s Office and Sample Room, the premises of R Hannah and Company, the Bank of New Zealand, and the Post Office.