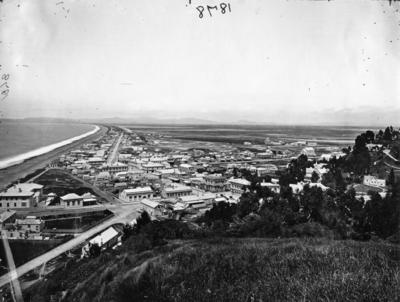 About this object
View of Napier looking south from Bluff Hill towards Awatoto thought to have been taken around 1878. At the base of Bluff Hill is the intersection of Byron Street and Browning Street. The Napier Courthouse (designed by William Henry Clayton, completed 1875), the Athenaeum (built 1865, reading room added 1873), and the premises of the South British Fire and Marine Insurance Company are visible along Browning Street. Large and Townley’s Furniture Showrooms are located on the corner of Browning Street and Herschell Street. The Bank of New Zealand and the Post Office stand at the intersection of Browning Street and Hastings Street. To the right, St John’s Church (1862) is located at the base of Napier Hill. This building is partly obscured by trees. The Trinity Methodist Church is visible in the distance behind St John’s. Tennyson Street, Emerson Street and Dickens Street are also visible.