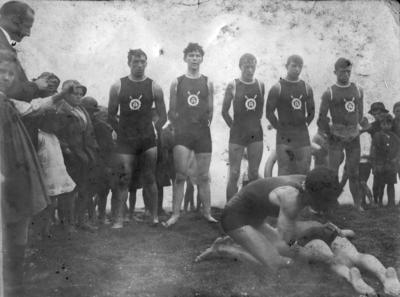 About this object
A photograph of young men from the Te Awa Life Saving Club during a public display or competition.

A group of young men are standing in a row on the beach. In the foreground one figure is crouched over another whilst he lies face down on the sand.

Spectators, largely children are visible in the background of the photograph and at the left edge.

The photograph appears to have been taken in the interwar period between World War One and World War Two.

Media/Materials description
Black and white photograph mounted on card. The photograph is mounted together with other photographs on the same card removed from an album.