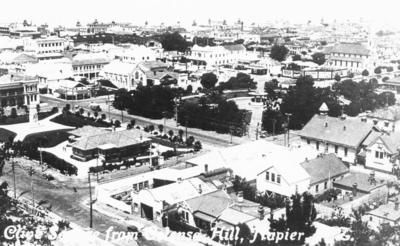 About this object
View of Napier from Colenso Avenue thought to have been taken around 1929. Memorial Square is visible in the left foreground. At the east end of Memorial Square stands the cenotaph (built 1921). To the west is the Mother’s Rest, designed by Napier architect J A Louis Hay in 1925. Gardens planted with young palm trees and a low limestone wall run around the perimeter of the square. On the opposite side of Emerson Street is Clive Square. In the centre of Clive Square stands the band rotunda.

A handwritten note that accompanies the photograph identifies a number of the other buildings. The note reads:
"Corner shop, Louders 'fruit and vegetable', also showing is Amners Lime Works office. Next, is HB Monumental Works. One advertisement on the hordings is for Velvet Soap. Corner foreground site was latter occupied by a building occupied by the car body building firm of Bate & Bell. Left middle is 'Manual Training School'."