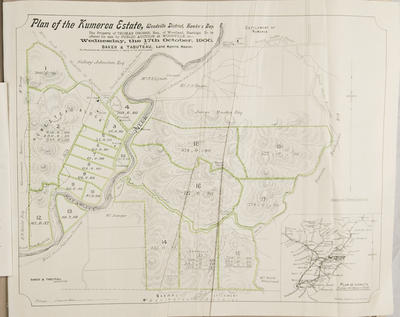 The land is to be sold by public auction on Wednesday October 17, 1900. Baker & Tabuteau - auctioneers.
The land consists 4,391 acres of freehold land and 365 acres leasehold land, which will be subdivided into 21 blocks, situated in the Southern part of Hawke's Bay between the Pahiatua district and Dannevirke district. Land lots with area sizes are shown around the Manawatu River, the road to Kumeroa and East Coast settlements, Wellington district and the settlement of Kumeroa.

Duncan Buchanan Esq has property at the eastern side. The homestead block is shown West of the river, bordering Sidney Johnston Esq's property. Mr P H Lynch and Mr J O'Hagan are adjoining land owners on the North East portion of the Manawatu River, near Kumeroa. James Mackie Esq has property adjoining lot 18 & 19 East of the Manawatu River. H R Holder Esq's property borders the government reserve and lot 12, which is adjacent to the road from Woodville, at the South West end.

Attached is a newspaper booklet describing the land for sale in detail. 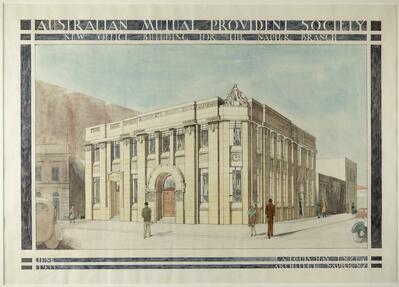 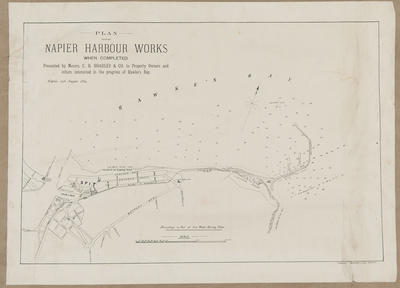 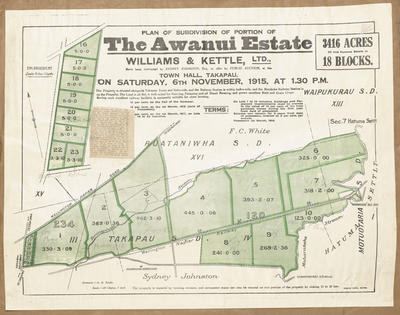