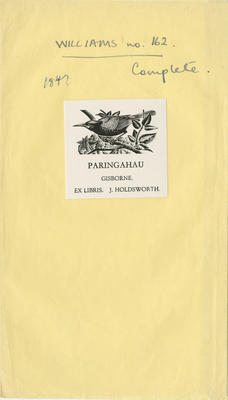 Brief Description
A leaflet and a bookplate.

a) A leaflet titled: He Korero Tenei Mo Ani Kanara, a religious tract about a good little girl. The text is written in Māori. This leaflet was printed by William Colenso at Waitangi Mission Station Press, Heretaunga, in 1847. The text consists of a religious tract, five pages long, of the story of Ann Chandler (or Anne Connor) who died aged seven. The source of the original story has not been identified, but William Colenso referred to having translated a story in 1846. The press was not operational until July 1847, but Colenso refers on 10 April to the impact of the story: During the morning, Ngatuere sent in his little daughter, and an hour or so afterwards, a note stating his wish to have her called Ani Kanara (Ann Chandler).

At the end of the text there is a woodcut illustration of three praying children and a woman in front of a seated Jesus. The illustration is accompanied by two bible references: Ruka, 18.16 and Matiu, 19.14.

b) The bookplate, of J Holdsworth, Gisborne, is on a separate sheet of yellow tissue paper.

[66151](1- 7) Leaflet
About Ani Kanara by William Colenso (b.1811 d. 1899)
Waitangi Mission Station Press
Williams no.162.
1847 Complete.
Paringahau, Gisborne.
Ex Libris, J.Holdsworth.
A STORY ABOUT ANI KANARA,
A faithful girl, young, only seven years of age.
This girl lived at the large village of Rānana. Andrew Reed was her Minister. Her parents and her brother did not attend prayers, they did not think about those things. Ani continued to go to prayers on Sunday’s at Martha Reed’s school. She would attend seperate classes to enquire about the covenants. When Martha Reed spoke to the children, you could see the interest towards Martha Reed on Ani’s face, she listened intently and did not shuffle around. She shunned all sin. One day, Martha Reed said, “It is a sin to swear”; the girl sat up and said, “Martha, at our home my brother swears all the time; I say to him that it is naughty to talk like that and to stop it, but he would not stop”. Martha said, “Never mind, you tell him this is the word of the Christ, do not swear”. So, when the girl returned home she told her brother the words of the Lord Jesus Christ concerning swearing and insisted that discard his swearing; at that her brother stopped swearing. In time the girl insisted that her brother attend Sunday school with her, then he agreed and he went. After some time, on another day, Martha taught that, “It is a sin to not keep the sabbath day holy”. Ani Kanara sat up and said,”Martha, my father and mother do not go to church, they stay home and do work; they do not come to the church”. Afterwards Ani went home but Martha Reed’s words were still in her heart; then Ani thought about how her parents were sinning and that was not good for her well-being. So she spoke carefully and humbly to her parents and told them about the good things about prayer, and humbly insisted that they should to come to church to pray. Well, her father became angry towards her, but they went to church together that very Sunday afternoon. Joy filled her heart and she was happy that her father went to church with her. However, her mother did not go to church yet, and this troubled Ani. So, Ani tried cautiously to coax her mother to come to church too. Her mother replied, ”I cannot leave the children by themselves”. Ani was thinking, yes that is true. However Ani did not agree that her mother should miss church. By rights, her mother should go to church too. After some time, Ani thought and thought, then she came up with an idea, she gathered up her courage and said to her mother.”You go to church, I will tend to the baby. Oh mother, don’t you trust me to care for the baby”? Her heart was filled with joy when her mother said,” Yes Ani, I do not mind to give you the baby”. So, her parents went to church together. The baby was demanding to Ani Kanara! Rightly still, for her it was like the words of the Christ, “Out of the mouths of babes and sucklings thou has perfected praise”. Matthew, 21.16.
Afterwards, still in April, it was noticed that Ani had not been to school. Martha Reed thought that perhaps there had been a death in Ani’s whānau, perhaps one of Ani’s younger siblings. Martha sent one of the school children to enquire. Next thing, Martha heard that Ani had a fever and was very ill. Her parents did not think it was very serious and that she just needed to sleep it off. However, she had had the fever for quite some time and her health had deteriorated quickly. During this time she stuck fast to her belief in the Christ. The doctor asked her if she was afraid to die and she replied, “No, I’m not afraid. When I die I am going to Jesus Christ, and I will rejoice!”
One of Ani’s school friends went to see her. When they came upon her, lying in bed, they spoke with her and shared happy times with her. Then Ani’s friend sung a hymn for for her. It went like this:
“My Lord, Jesus Christ;
You are my Redeemer;
Make things as they once were
To be like a newborn, I should do so too.”

Ani replied, “Alas, throughout my struggles,
He has been my mentor!”
Now, Martha Reed went to see Ani. Upon her arrival Martha heard how very ill Ani was, and how close to death she was, how much pain she was in, and how the fever had not left her; even so, she had continued praying, she had been patient, and she slept peacefully.
Martha Reed went inside and Ani woke up, she turned her face toward Martha and composed herself, and reched out to Martha with her tiny hand and said, “Martha, come closer”. Now Martha replied, “Are you happy to spend your last moments with me?” If so, may I share my love with you?” Ani replied, “ Of course! That is so you Martha!” Martha enquired, “ Who is it that loves you unconditionally?” Ani said, “Oh Martha, it is Jesus Christ!” Martha then asked, “How did he show hislove?” Ani sat up and said, “He died for me.” Martha asked, “Do you love Him?” Ani replied, “Yes Martha, immensely.” Martha added, “Are you content that when you die you shall go to be with Him?” Ani replied, “ Yes, I am content with that.” Martha enquired further, “ Is there anything I can say to help make your journey to Him easier?” Ani responded clearly, “Suffer not the little children to come unto me, for theirs is the kingdom of heaven.” Martha asked, “Other than death itself, is there anything else that you need to do to be with Him?” Ani said, “Yes there is Martha, prayer.” Martha asked, “What is your favourite prayer to Him?” Ani replied, “Create in me a new heart.” Martha asked,
“ What does a new heart mean to you?” The girl replied, “A heart that nurtures and grows a love for Jesus Christ.” Then the pair spoke of another place. After that, she was closer to death. Her mother drew near and Ani placed her hands on her mothers cheeks, and called out, “Oh mother, mother, here He is, He has arrived, Jesus Christ has arrived; He is holding out His hands to me to take me home.” Ani’s mother stood beside her, fretting about her daughter and she said to Ani, “Do you understand what is happening?” Ani replied, “Yes, yes I do...” Her words faded, and she was silent. Her tiny hand gestured, a sign of victory, a sign of strength, then her spirit left and went to Christ’s kingdom.
So, she was buried, and her parents cried, for she was now gone from them; Her mother cried, “Alas! Oh my! It is a very hard thing for me to accept that she has been taken. I have not seen another child like her. Her compassion, her kindness, her thoughtfulness, her dedication! We must all pay tribute to her for her goodness. Alas! Oh dear! Not long later, Ani’s father sat up and said, “Oh dear, that’s enough, understand that this is the card that God has dealt us, to come and pluck only the best.” Again, works of the truth! Hear our cry. We will remember in her in our hearts. Her parents were very proud of her, and her diligence at prayer.
Now, look, consider this lamb of the flock of Jesus Christ. Remember her faith. Look at her fruits. Diligent and alert. This was her, she would stand in faith and deliver the scriptures with the Holy Spirit in her heart. We need to change and take care of one another so that we may enter into the House of Christ. I have one last thing to say, that I mourn for this little girl.
Words of thanks from Christ:
“At that time Jesus answered and said, I thank you Father, Lord of heavens and earth, because you have hidden these things from the wise and the prudent, and have revealed them unto babes.” (Matthew, 11.25).
And also, “But God has chosen the foolish things of the world to confound the wise; and God has chosen the weak things of the world to confound the things which are mighty.” (1Corinthians. 1.27).
“And I heard a voice from heaven saying unto me, Write,Blessed are the dead which die in the Lord from henceforth: Yea saith the Spirit, that they may rest from their labours; and their works do follow them”. (Revelation. 14.13).
God has made all things to grow and overcome the world: this is the victory to overcome the world; our faith. Who can overcome the world? Only them that believe in Jesus the Son of God.
Printed by Colenso Press
Waitangi, Heretaunga.

Media/Materials description
a) three leaves of paper, printed on black ink, both sides.
b) yellow sheet of tissue paper to which bookplate is adhered. Bookplate printed in black ink. 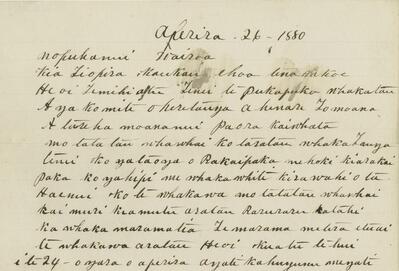