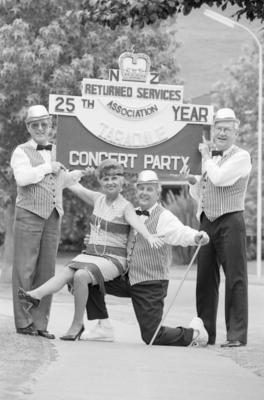 About this object
On With the Show. Dressed in 1930's costumes party members will sing a birthday song as the 25th anniversary cake is cut this weekend. From left: Les Robertson, Eunice Brown, Malcolm Parker and Laurie Cram. Members of Taradale RSA Concert Party. Says Mr Cram, We were formed to foster happiness and goodwill.

Photograph taken 19 November 1993 and published in newspaper on same date.

Media/Materials description
A strip of three negatives on same subject.