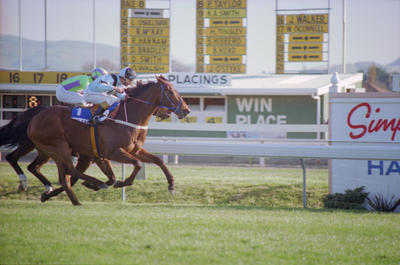 About this object
By a nose. Calm Harbour, No 1, and jockey Lance O’Sullivan get up in the last few strides for victory over Solvit, ridden by David Walsh, in the $100,000 Kelt Capital Stakes, the feature race of the Hawke’s Bay Jockey Club’s meeting at Hastings on Saturday.
The win clinched Calm Harbour a start in the A$1.5 million Cox Plate in Melbourne on October 23. The horse is due to fly to Australia tomorrow.