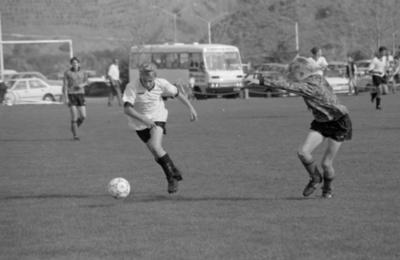 About this object
On Burst – Hawke's Bay - Poverty Bay’s Mark Foote finds space in the Festival of Soccer 1-1 drawn game against Canterbury earlier this week at Park Island.

Image of player running forward away from opponents goal. Spectators visible in the background.

Media/Materials description
Photograph cropped from origianl for publication in the newspaper.
7 strips of film, 21 negatives on the same subject.