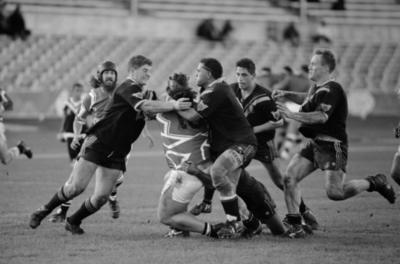 About this object
Unicorns in good display of talent - Five New Zealand Universities' defenders move in to halt the progress of Hawke's Bay strongman Sean Barclay, in action from yesterday's non-championship rugby league match at Hastings which Hawke's Bay won 18-16.

Image of man running forward on sports field whilst a group of defenders tackle him.