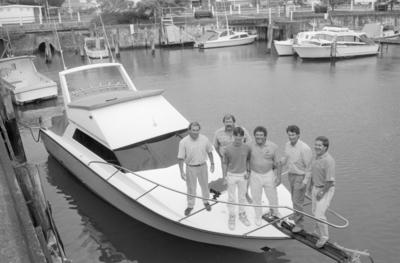 About this object
Top effort by Napier Fishers - The fishermen who outfished all the rest, pictured on their boat, Deliverance, which took them out to the right spot for game fish. The team that accumulated a national championship winning tally of 4835 points are: (from left) Mike Pollett, Keven Picone, Andy Paterson, Jason Dickey, Graeme Dickey (skipper) and Dean Dickey.

Media/Materials description
5 strips of film, 15 negatives on the same subject. Photograph cropped from original for publication in the newspaper.