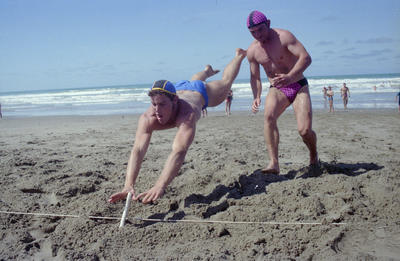 About this object
Winning Dive - Pacific's Steven Offen launches himself toward the baton, to win the open beach flag event, from Ocean Beach Kiwi's Malcolm Donaldson, at Waimarama Beach at the weekend. The 1993 Hawke's Bay surf life saving championships were, however, a triumph for the Ocean Beach Kiwi Club. Despite having several top competitors unavailable, the central region champion club completed the regional provincial double by heading off Westshore for the title.