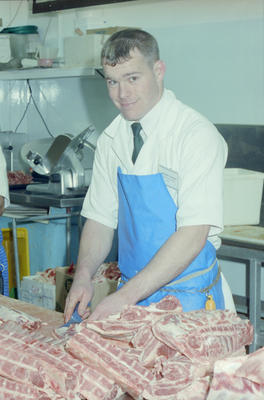 About this object
A Cut Above - Tamatea butcher Chris Stringer made mincemeat of the opposition at the weekend when he was named Central Districts Young Butcher of the Year. Mr Stringer, 21, who is approaching the end of his apprenticeship with Safeway in Tamatea, travelled to Wellington for the competition. Following a written and practical test he was judged the most promising of the 11 competitors. He was presented with a carving set and will return to Wellington on September 29 for the national finals.

Photograph taken 30 August 1993 and published in the newspaper on that date.