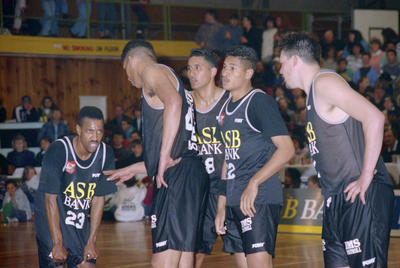 About this object
National Basketball League. Hawks spread their wings - Just like the United States NBL, another top five on court at once. The Hawks five from left are: Terry Giles, Kerry Boagni, Byron Vaetoe, Johnny Seumanu and Brent Matehaere.

Photograph taken by Catherine Millar on 21 August 1993 and published in the newspaper 25 August 1993.

Media/Materials description
27 strips of film, 78 negatives on the same subject. 3 further negatives published on the same date on the same page. Photograph slightly cropped for publication in the newspaper.