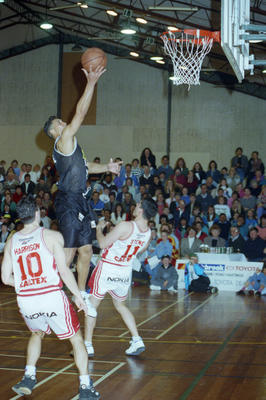 About this object
National Basketball League. Hawks spread their wings - An easy two points for Hawks co-captain Byron Vaetoe who scored 33 points in the win. Aucklander's Gary Harrison, left, and Tom Stone can only admire his style.

Photograph taken 21 August 1993 by Catherine Millar and published in the newspaper on 25 August 1993.

Media/Materials description
27 strips of film, 78 negatives on the same subject. 3 further photographs published in the same newspaper on the same date.