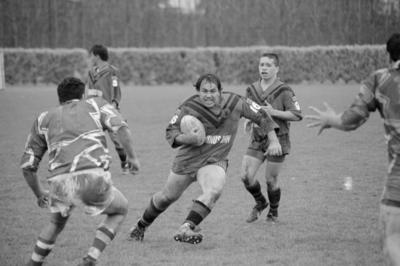 About this object
Veteran Ōmāhu Huia prop Charlie Kennedy Snr sets off for his try in yesterday's 52-12 win against the Whatuiapiti Warriors at Napier's Park Island. Ōmāhu Huia qualified for the play-offs in Hawke's Bay premier club rugby league competition.

Media/Materials description
2 strips of film, 6 negatives on the same subject. Photograph cropped from original for publication in the newspaper.