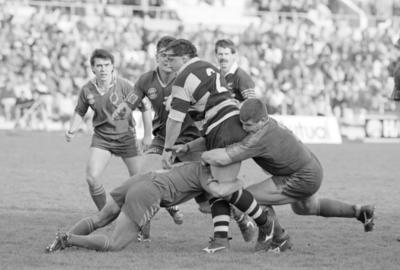 About this object
Marked man. Hawke's Bay captain and hooker Norm Hewitt is the subject of close attention from several Otago players during the national first division rugby match at McLean Park, Napier, on Saturday. The All Black reserve hooker had few chances for his trademark bullocking runs and the Magpies lost 20-9.

Media/Materials description
9 strips of film, 27 negatives on the same subject.