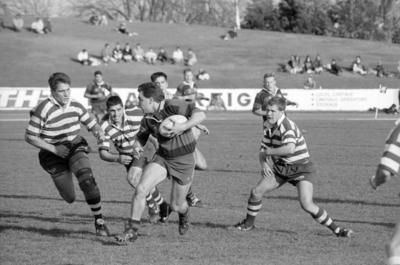 About this object
Oops! Wrong Way: Havelock North first five-eighth Dave Wilkinson is pictured heading into heavy traffic in the form of 1992 All Black flanker Dallas Seymour during Saturday's Hawke's Bay division one club rugby final at Nelson Park, Hastings. Seymour, having his first game since transferring to the Bay, Taradale first-five Dillon Solomon (centre) and their team mates were on the way toward a 35-18 Madison Trophy triumph.

Media/Materials description
3 strips of film, 9 negatives on the same subject. Photograph cropped from original for publication in the newspaper.