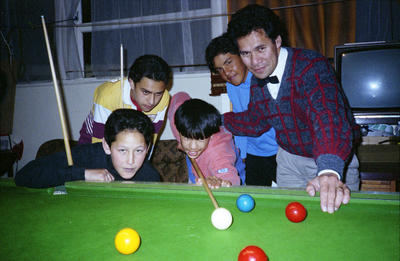 About this object
Winning not everything says snooker enthusiast. Budding snooker players, from left, Trevor Jackson (13), Trevor Christie (14) and cousin Willie Christie (15) watch as champion Wyn Belmont (left) corrects the stance of his son Wayne (12). Five boys are being coached by the Hawke's Bay number one player.

Photograph taken 6 August 1993 and published in the newspaper on that date.

Media/Materials description
2 strips of film, 5 negatives on the same subject. Photograph original in colour but published in the newspaper in black and white.