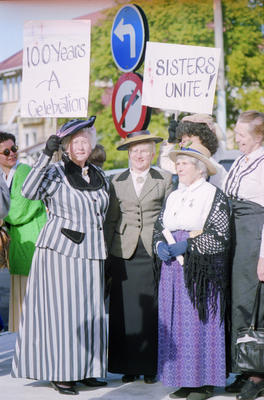 About this object
The Memorial Square Community Rooms were officially opened today as the Napier City Council's official celebration of Women's Suffrage year. Pictured from left are May Blair, Judy Mills and Joan Rogers of the Women's Suffrage co-ordinating committee who marched in the parade to mark the opening of the Memorial Square Community Rooms.

Photograph taken 31 July 1993 and published in the newspaper on that date.

Media/Materials description
Photograph cropped from original for publication in the newspaper. More women and background detail in original image.
4 strips of film, 12 negatives on the same subject. Photograph originally in colour but published in the newspaper in black and white.