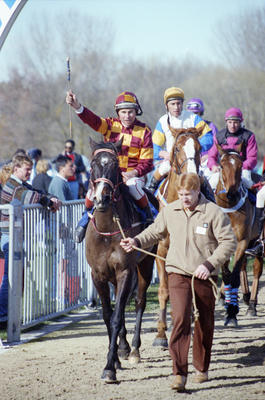 About this object
Cambridge jockey Michael Douglas gives a victorious salute as he brings Dark Fox back to the birdcage after winning the Lowe Walker Hawke's Bay Steeplechase at a Hawke's Bay Jockey Club Meeting on Saturday. The winning jockey sits atop horse being led in procession of horses and jockeys through winners circle. The winner had to survive a protest from the stable of favourite, In The Team, before being awarded the honours in the winter feature.