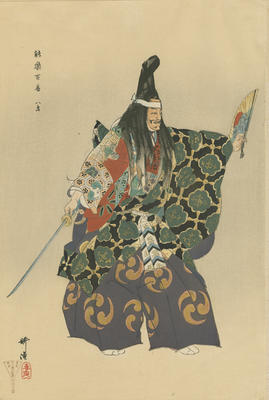 About this object
Japanese coloured woodblock print on textured paper. Depicts a Kabuki character wearing the Nochi-shite costume from the Noh play Yashima.

Yashima is about several priests come to Yashima Bay, the site of a famous Genpei battle in which the Minamoto, led by general Yoshitsune, routed the Taira. Two fishermen appear and tell the priests in detail of that battle. When asked their names, the fishermen promise to return in the priest’s dream. Later the ghost of Yoshitsune appears and tells of the battle, in particular how he retrieved his dropped bow from among the enemy ships. He mimes the battles between asuras in warrior hell, and then disappears.