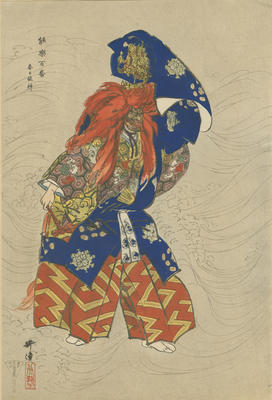 About this object
Japanese coloured woodblock print on textured paper. Depicts the character Kasuga Ryūjin from the Noh play The Kasuga Dragon God.

This Japanese Noh play is often attributed to Komparu Zenchiku, son-in-law of Zeami Motokiyo. The play features the historical figure Myōe Shōnin (1173 – 1232), abbot of the Buddhist temple Kōzan-ji, and famous for his detailed dream diary. Myōe sought for many years to visit China and India, and to witness the places where the historical Buddha preached; in episodes recorded in his dream diary and other sources, Myōe is said to have been visited, both in dreams and via oracles, by the Dragon God of Kasuga Shrine, who persuaded him to remain in Japan. The play is inspired by and based upon these sources, and relates one such meeting of Myōe with the Dragon God.