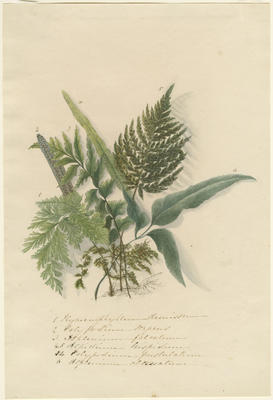 About this object
Watercolour on paper depicting a grouping of various plants. The plants have been numbered from one to six from left to right. The plants featured in the work include:

2. Polypodium serpens. The plant has similar features to Pyrrosia eleagnifolia (Bory) Hovenkamp although it is uncertain exactly what fern is depicted in the painting. The plant is depicted as a single narrow green fern with several brown circles known as sori.

3. Asplenium falcatum also known as sickle spleenwort. The plant is depicted as a dark green glossy frond with slightly serrated edges on the leaflets.

5. Aspidium hispidum also known as Lastreopsis hispida, hair fern and tuakura. The plant is depicted as a deep green fern with finely divided fronds. It has small light brown circles known as sori.